Over the years, Hackney Wick and Fish Island’s glut of ex-industrial units and vacant lots have afforded numerous actors – from community organisations and artists, to business owners and creative practitioners – access to and free-reign over low-cost land, studio space, and warehouses. From skateparks to food-halls, festivals to theatres, artist studios and night-time venues, ‘meanwhile use’ spaces have enabled sustained the area’s rich self-build culture, and underpinned the emergence of much-loved institutions.

While such spaces undoubtedly offer provision for creative projects and affordances that might not be as easily secured elsewhere, as the number of new builds properties in the area increases, affordable meanwhile use spaces are harder to come by. Increasingly, they are co-opted by developers keen to turn a profit rather than establish sustainable and socially-just models of urban living. As one developer overseeing a new-build development in Hackney Wick put it, meanwhile use spaces are attractive to developers not for their social or cultural potential, but because they can render new-build developments ‘active’ and ‘used’, and are thus an effective tool for drawing in other tenants. 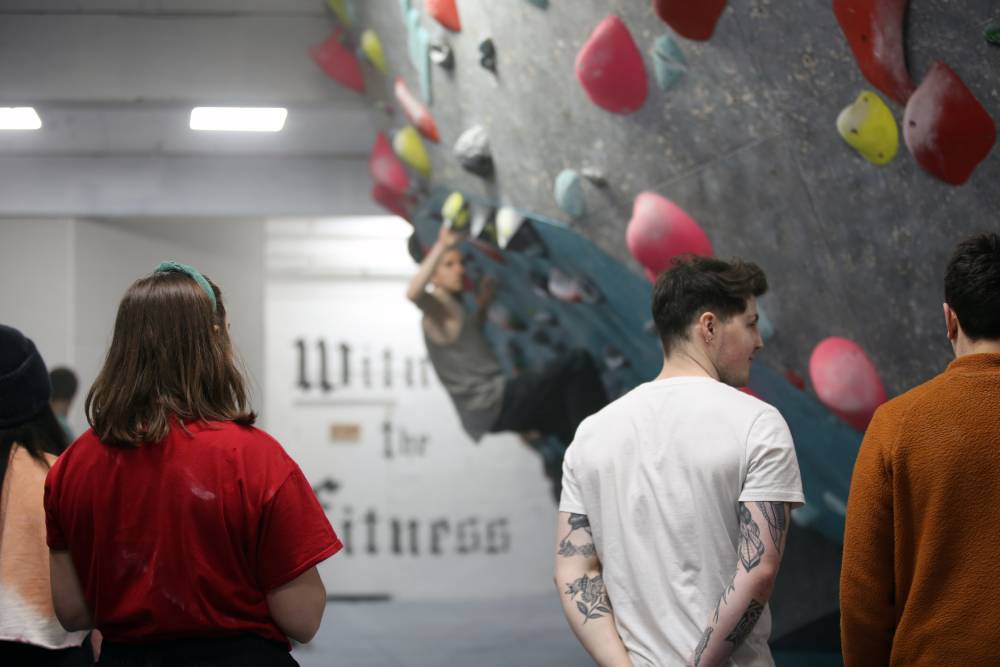 It’s a Sunday evening in January, and though its cold and wet outside, the ground floor unit of 117 Wallis Road – the warehouse space comprising Arbeit Studios perhaps best known for its Thierry Noir mural or past iteration as SHAPES nightclub – is as busy as it’s ever been. Clouds of chalk dust hang in the air, cut through by whoops, cheers and flailing limbs as climbers gather to tick off their last ever boulder problems in London’s smallest but most perfectly formed bouldering centre.

Built on a shoe-string budget, Hackney Wick Boulder Project (HWBP) gained somewhat of a cult following over its five-year existence after it opened in late 2016, pulling climbers from across London drawn by the centre’s focus on community-building, friendliness, and good quality route setting. As director Jack Griffiths explains, HWBP was only supposed to be a short-term project: the two year lease granted by the landlord represented a low-cost opportunity to build a climbing community in the area while Griffiths and his team searched for a larger, permanent venue. Griffiths hoped bouldering’s mix of physical and intellectual stimulation would be of interest to artists and creative types already embedded in the area, and offer somewhere for local residents to hang out without alcohol.

Reminiscing over coffee at Pearl, Hackney Wick local and HWBP regular Victor Bature – originally from South East London – explains that, although HWBP was “done quite cheaply, it worked – there wasn’t anywhere else like it”. Like many of its users, HWBP was the first climbing wall Bature set foot in. Regular exercise wasn’t on his radar, but he signed up for a membership immediately after his first taster session in early 2017, and soon found himself climbing there up to five times per week. Bature recalls a whole list of people he’s still in touch with that he met at HWBP over the past half decade, emphasising its significance as a space for social interaction and connection as well as physical exercise.

For many of its users, the social aspect of HWBP was of equal importance to the climbing itself: people would come to HWBP from across London specifically for the sense of community fostered by the centre. Along with regular climbing competitions, HWBP featured weekly ‘boulder socialite’ sessions in which experienced members mentored and supported fledgling climbers. Such informal support mechanisms were mirrored by publicly-funded programmes such as the ‘climbing for wellbeing’ sessions, a collaboration with Inner World Arts and Core Arts Hackney organised by local artist Pete Bennett which provided free climbing to improve the mental health of Hackney, Tower Hamlets, Newham, and Waltham Forest residents.

Just a few minutes’ walk from HWBP on the other side of the railway line in Queen’s Yard, The Yard Theatre perhaps epitomises the social and cultural value of meanwhile use in Hackney Wick and Fish Island today. Built with an informality that connects the theatre to the city and, according to creative director Jay Miller “enables an energy which is irreplaceable” – think the sound of sirens and engines from White Post Lane, or rain pattering off the corrugated roof during performances – The Yard Theatre emerged initially as a three-month project in 2011. Drawn to richness and diversity of the area, Miller described Hackney Wick back then as “like a sort of interim space in itself”. 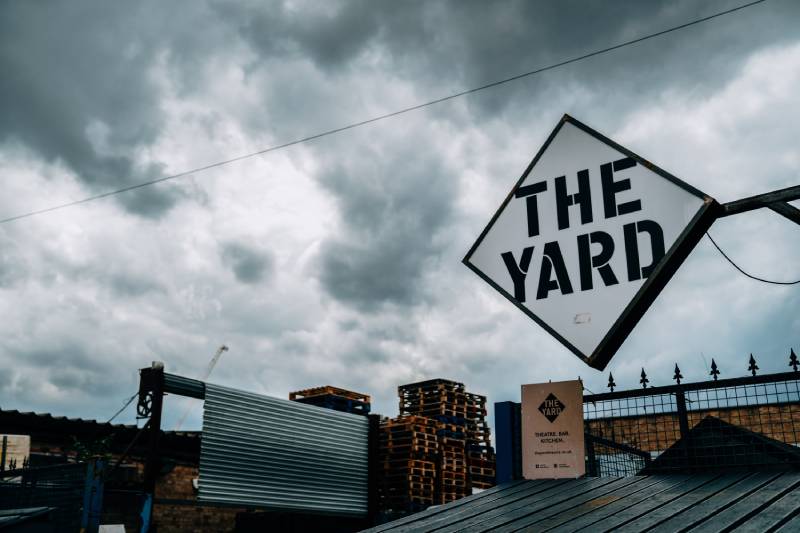 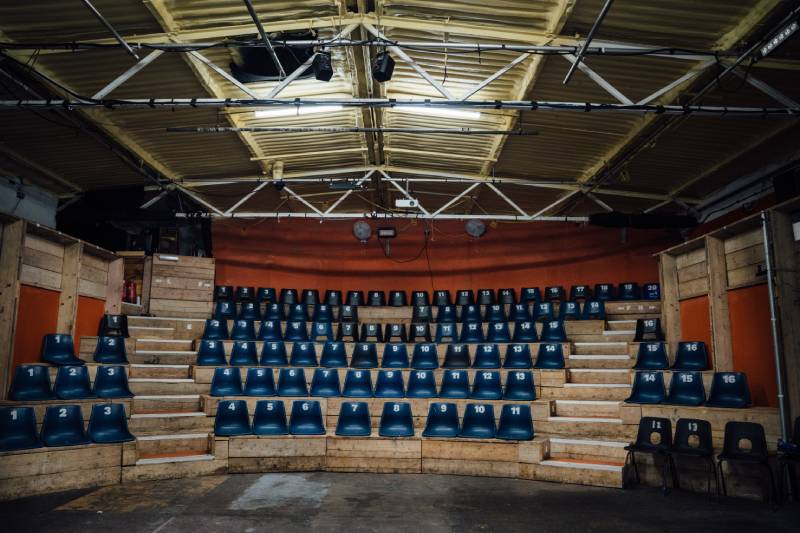 Over the past decade, The Yard Theatre has experienced a stratospheric rise, expanding to two more meanwhile use sites in Hackney Wick and East Village, and offering space for community events, programmes for children, young people, and residents, as well as a theatre, bar, kitchen, and night-time venue. After being granted three years funding by the Legacy List in 2012, the theatre shifted from a project with a temporary outlook to one seeking permanence. As Miller reflects: “An audience is a long term relationship that requires a bedrock of trust built over time. It felt irresponsible to start these relationships without thinking through permanence.” 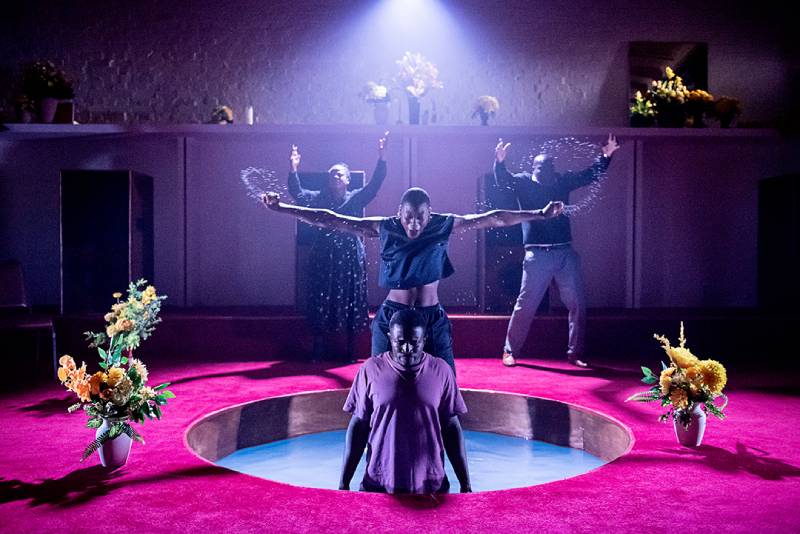 Another practitioner well versed in the benefits and challenges represented by meanwhile use projects is Tom Fletcher, the founder of Rejuce, a food waste business based in Fish Island. For Fletcher, meanwhile use spaces offer affordances to try new things and learn from mistakes without the worry of financial ruin. “You’ve got to be prepared” that things don’t work out, Fletcher muses, “but it doesn’t mean that something magical can’t happen in the interim.” Though a departure from the sustainability focus of Rejuce, Fletcher’s new multi-purpose offering Vittoria Wharf Studio, self-built in Fish Island on a two-year lease to host video and photo shoots, yoga classes, supper clubs, and private events strikes an intriguing balance between ‘magic’ and economic practicability. Recent clients at the studio include Sony and Converse, but Fletcher also hopes to use the space to rekindle Beggar’s Banquet, a charitable food waste supper club previously housed in the same building before the installation of a footbridge connecting Fish Island with the Olympic Park cut the unit in half several years ago.

Just a stone’s throw from 117 Wallis Road, the former site of the now-closed HWBP, colourful hoardings displaying the message ‘Behind these panels is the stuff of dreams … fantastic commercial spaces that’s only waiting for your magic to come to life’ conceal multiple empty ground floor units. As urbanist Mara Ferreri reminds us, the tantalising lure of meanwhile use spaces can obscure their function as a de facto cog in the neoliberal city-making machine, where socially and culturally important spaces are cast as no more than ‘filler’ for landlords or developers keen to attract prospective tenants to ‘fantastic commercial spaces’ in new-build developments. 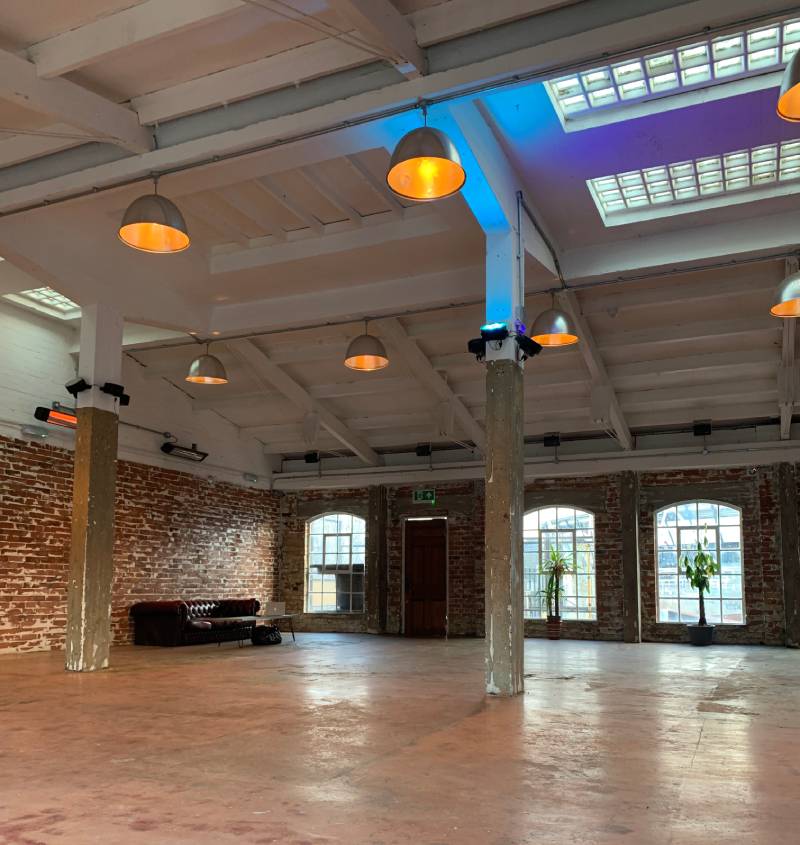 Likewise, as the recent collapse of the mezzanine at Two More Years in Fish Island brought into sharp focus, when meanwhile use spaces go wrong the results can be disastrous. In many ways though, the examples introduced above stand as evidence of the deep and long-lasting social and cultural benefits that meanwhile use spaces afford. Not only do short-term use spaces provide prospective business owners and creative-minded practitioners the opportunity and platform they need to get off the ground on an often meagre budget, but they can also flourish into spaces of huge significance for local, regional, and national publics alike, muddying the relationship between temporariness and permanence in the process.

If Hackney Wick and Fish Island is to thrive as a socially-just, liveable neighbourhood in the years to come, it is of utmost importance that the artists, creative practitioners, and business owners who have woven the social and cultural fabric of this idiosyncratic east London neighbourhood over the past two decades are afforded the same low-cost opportunities by the new-build developments as those granted by the disused light and heavy industrial warehouse units that once defined the area.